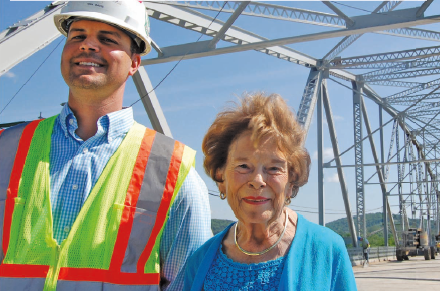 It’s been more than six years since Sue Petty Maggart drove from Carthage’s Main Street across the Cordell Hull Bridge to where it runs smack dab into Highway 70 below a towering limestone bluff.

She estimates that during her lifetime she has made some 30,000 crossings over the Cumberland River via the 88-year-old steel truss bridge, a trip she earnestly wants to take again.

“I always loved the river. I loved the bridge. Debate was up: save it or destroy it,” said Maggart, forlorn that the structure has been shut to traffic since December 2007 when Tennessee Department of Transportation bridge inspectors discovered significant deterioration to the bridge’s steel truss, spans, and connections.

But her date to motor across her favorite bridge has come again.

The Mid-State Construction Company, based in Livingston,Tenn, has completed a 32-month long chore, the $9.5 million restoration of the grand old bridge. Among the details, workers removed and replaced the concrete bridge deck in all truss spans, replaced the bridge rails, performed structural steel repairs and bearing replacements and did concrete repairs on the bridge piers. The structural steel also was blast cleaned and repainted.

Over the decades, Petty, who has served as Smith County historian the past 24 years, was one of many who championed the bridge which features a 318-foot central Park Truss flanked on each side by Warren Trusses. Built by the Vincennes Steel Company of Vincennes, Ind., the structure, named in honor of Cordell Hull, Secretary of State under President Franklin D. Roosevelt, opened to traffic May 14, 1936.

“The first bridge was supposed to be torn down when the new one was finished, but Gov. [Ned Ray] McWherter wanted to keep it,” said David Bowman, Carthage Mayor from 1990 to 2010.

“It was a long way around,” he said, comparing the 2½ extra miles from downtown to Highway 70 using the new bridge, “and we needed two ways out of town in that direction. It’s a safety feature, it’s convenient, and it’s historical.”

George Emberton took his car out on the ice when the Cumberland River froze in late 1939 or early 1940, allowing Gordon Petty, right, to snap a photo. This image was taken by Petty’s brother Victor, who also captured the Cordell Hull Bridge in the background.

“Miss Pauline Gore wanted it to stay, so she talked to Gov. McWherter, and Al Gore Jr. got bridge replacement funds,” he noted of work done before this millennium.

“Approximately 7,000 cars a day were using each bridge, so it’s pretty equal. If you go across the old bridge down Highway 70 to Lebanon, it saves you from going to Gordonsville and down the intestate. That saves time. Most people like going down the old road, and in the long run it’s faster, making it more convenient.”

While the fate of the old bridge was hanging in limbo for several years, Petty read an article by Carthage Courier editor Eddie West noting that the structure was eligible for the National Register of Historic Places.

“I thought if it was eligible, somebody should try. I thought it would be a small application but it was 40-something pages,” recalled Petty. “I started researching in the Courier and the county court minutes. My inspiration was Eddie’s article in the paper.”

Her quest paid off when the bridge was placed on the National Register on Nov. 20, 2009.

“I was very elated, I was very excited. I felt the work I had done was justified,” Petty said. “The bridge was closed about the time Wal-Mart opened, and downtown looked like you see it today. It was so important for people who live on the west side to be able to bring their children to school. The differ-ence is about five miles a day.”

“Every two years our inspectors have to inspect all bridges in Tennessee on public roads. The [Hull] bridge had deteriorated to a point where it drew our evaluation of that steel. We felt that it was unsafe for that bridge to carry vehicular traffic any longer, and so we decided to close the bridge to traffic,” said Wayne Seger, director of TDOT’s division of structures, about one of the last 50 truss bridges in the state open to traffic.

The historic bridge began its lengthy rebirth in October 2011. Overseeing its gestation period and delivery was the Mid-State Construction Company.

“This could be one of the oldest bridges I’ve worked on,” said project manager Nick Davis, who has labored on about 50 bridges. “We’re a repair contractor. We travel across the state. This is kind of our niche.

“We had to first take the deck off and take the beams up. All the girders were replaced. It’s kind of like working in the bones of the structure before getting to the visual part,” he says. “We had to remove all the old rivets and connecting plates in some areas. These areas had to be cleaned and processed and new plates were installed. We had approximately 475 locations where that was done.

“The bridge was raised at the pier. After the deck was off, we had to jack up the bridge to replace bearings. It was jacked in six locations, from one to two inches to give them working room to get the old out and slide new bearings in.

“The biggest challenge was the structural steel repair. There are places where every plate was different. We liken this to remodeling a house where you don’t know what’s behind the walls until you get in there,” Davis said.

“It’s basically a brand new bridge on the Carthage side. About 70 percent of the bridge is original. The deck is new and all the substructure, diagonal beams and lacings are original. We’ll have brand new lighting.”

Among other obstacles, workers faced long days in the heat and cold and often dealt with 30 mile-per-hour winds. Of course, the men who fashioned the bridge in the mid-1930s faced similar hurdles beginning with the funding.

It was Hull who helped the city and county get the money through the National Industrial Recovery Act and the Works Progress Administration.

Once the state designed the bridge in 1934, the Vincennes Bridge Company began work on December 4 that year with 16 men on the job. Among other chores they drilled about 90 holes 70 feet deep into rock for the foundation.

By May 1935 they started erecting the trusses. The Courier reported the new Carthage Bridge “is going to be tall and handsome, and one of the great improvements that has come to Smith County in a very, very long time.”

During the project one man died after he was hit by a falling timber beam. A citizen shared his opinion in a letter to The Carthage Courier: “No, the bridge is not as large as the Brooklyn Bridge that has a center span of 1,595 feet, but the work is just as hazardous. Workers have to crawl over the steel work like squirrels hopping from limb to limb in the treetop. One man lost his life when a piece of timber fell several feet, striking him on the side, causing internal injuries.”

With this month’s rebirth of the Cordell Hull Bridge, there should be positive effects for the sister cities, Carthage (population 2,300) and South Carthage (1,300), separated by the Cumberland.Nevertheless, May 14, 1936, proved a day for jubilation when County Court Clerk Ed High became the first man to officially hike across the 1,412-foot-long structure as it opened for traffic to cars, trucks, tractors, beasts and barefoot boys and girls.

Local businessman Bill Markham opened his Markhams Department Store on the Carthage square in 1971 but locked the doors about five years ago when the traffic flow across the bridge came to a halt.

“It closed about everything,” he recalled. But Markham is optimistic there will be sunnier days ahead, thanks to the reborn bridge. “We’re planning on opening the store as soon as possible. We always had a good business there, and we expect it to return.

Cordell Hull Bridge by the numbers

Curb-to-curb width: 24 feet with bridge tapering to 60 feet wide at the south end

Height: Approximately 120 feet from water to top of the overhead truss

• Before the Cordell Hull Bridge spanned the Cumberland River at Carthage, local businessmen Wint Williams and Ed Myer formed the Williams-Myer Bridge Company in 1906 and began construction of a toll bridge. This bridge opened Feb. 11, 1908.

• Fees charged to cross the bridge were five cents for a pedestrian; 10 cents for a man on horseback; 15 cents for horse, buggy and rider; and 20 cents for a loaded wagon, team and driver. The first toll keeper was Jim Highers.

• In 1927 the county and state purchased the bridge and began to allow free passage. Citizens held a picnic on the Smith County courthouse lawn to celebrate. After the Cordell Hull Bridge opened, the last span of the old bridge was pulled down on May 26, 1936, as hundreds witnessed its last breath. Old-timers recollect the bridge was built of steel overhead, while the roadway was constructed of wooden planks and “rattled like thunder” whenever a vehicle drove across.

Cordell Hull Born in 1871 in a log cabin in Olympus, Tenn. (today part of Pickett County),
Cordell Hull served 11 terms in the U.S. House of Representatives and part of one term as U.S. Senator. Appointed Secretary of State in 1933 by President Franklin D. Roosevelt, Hull served in that capacity for a record tenure of 11 years. A graduate of the Cumberland School of Law at Cumberland University in Lebanon, Tenn., he resided in and practiced law in Carthage during the early decades of the 20th century. In 1945 he was awarded the Nobel Peace Prize for his part in helping organize the United Nations. He died in 1955 at the age of 83 and was buried in the vault of the Chapel of St. Joseph of Arimathea in the Washington National Cathedral. The Cordell Hull Birthplace & Museum State Park is located near Byrdstown, Tenn. For details, go online to cordellhullmuseum.com