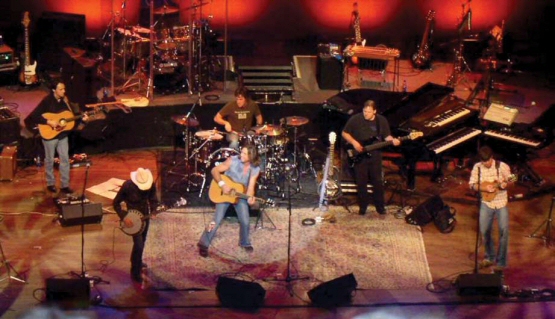 Many young men and women come from all over the country to “music city” in order to pursue their dreams of making it big in country music. Unfortunately very few ever realize their dreams and many end up returning home to pursue different dreams.

Many young men and women come from all over the country to “music city” in order to pursue their dreams of making it big in country music. Unfortunately very few ever realize their dreams and many end up returning home to pursue different dreams. Luckily for us, three such men are not only on their way to realizing those big dreams but they are doing so while raising their families and putting down roots here in Wilson County.

Together they make up the band, Carolina Rain.

Carolina Rain’s talents are so dazzling and so self-evident many believe this group should have vaulted to instant stardom years ago with this first album. Instead, the group’s bonds have been strengthened by a climb that has sometimes been painfully slow. “It feels like we have been waiting forever for this moment,” says Jeremy. “We’re finally getting the opportunity to go out there and do it.”

After years of working together, Rhean, Jeremy and Marvin have become more than just band mates. They now consider themselves family.
And together they are each raising their own families in Wilson County.

On the surface, they couldn’t be more different. One comes from a Tennessee bluegrass-gospel family band. One was classically trained in South Carolina and was once Broadway-bound. One played in rock bands and ran with a Virginia biker group. But when they sing, Jeremy Baxter, Marvin Evatt and Rhean Boyer are blood brothers. The trio met when Rhean took a job as a security guard at Belmont University in Nashville. New arrival Marvin applied for a similar job in 1999, and the two were soon riding around in a squad car, writing songs together. A few months earlier, Jeremy had walked into choir practice at Hillcrest Baptist Church in Lebanon to find Rhean sitting in his spot. He sat down beside him, and they heard one another’s voices for the first time. Then Rhean brought Marvin with him to services.

They got Jeremy a securityguard job at Belmont, and the trio began rehearsing in earnest. Their first songwriting collaboration, “Carolina
Rain,” also named the trio.

A few months later, Carolina Rain sang their songs for Equity’s Mike Kraski and were offered a contract on the spot. In 2004, producer/songwriter Stephony Smith took Carolina Rain into the studio to begin work on its album for the label. Progress continued
in 2005 when Equity Music Group partner Clint Black offered the trio the use of his studio.

Their first album, which was coproduced by Clint Black, was “Weather The Storm”. Every song, except for one on the album, was written by lead singer Rhean Boyer. To the delight of this band, “Weather the Storm” produced two top 25 singles.

In January 2009, the band’s much anticipated second album “American Radio” will hit stores. And the trio is ready. The first single off the album is “Weight of the World”, a fitting song for these times when many people are feeling the weight of the world on their shoulders. The group was able to use their very own band on this album which was something they had been dreaming of doing for years. Using their own guys really brought a new energy and excitement level to the project. According to Rhean, “music is supposed to make you feel something or it’s just noise. Our goal for this album was to take our fans and listeners on an emotional journey”. Legendary engineer and producer Justin Niebank co-produced this album with the group and are all anxiously awaiting its debut.

The group is excited about their new record and they are ready to begin touring to help promote it. When they are not on the road though, all three men call Wilson County home.

Raised in Lebanon, Jeremy began singing and playing mandolin at age 16. The Salem Singers, his family’s bluegrass-gospel group, changed its name to New Grace when he joined. He performed in area churches throughout his teen years. After high school Jeremy went on to be a member of the Vol State Singers while he attended community college in Gallatin. Today, Jeremy is married to Tyelisa and they have two children, Sadie and Silas. They are making their home in Lebanon.

Marvin grew up singing in Central, South Carolina, He attended Andrews College in Georgia on a voice scholarship, sang opera arias, harmonized in gospel quartets and was being groomed for Broadway musicals when he abruptly decided to move to Nashville. “I had dreamed of getting into country music my entire life, but was too scared to do anything about it. I literally woke up one morning, went to my Mom and Dad’s and said, I think I’m going to move to Nashville. I packed every single thing that I owned in the back of my little Ford pickup truck and took off. It was pretty hard for my voice teacher to take.”

Marvin is not married but is dating someone seriously and resides in Mt. Juliet

Rhean hails from Virginia Beach, Virginia. Both his parents were musical and Rhean received his first guitar at age seven. He was mesmerized with music from that moment on. By the time he reached high school, Rhean was a local rock star. But by then, he was also destroying his talent. “When I was about 13, me and my buddy each drank five wine coolers and got fallingdown drunk. And that started off my drinking career. Drinking and drugs stole my music from me. I left home at age 17 on a bad note. I grew my hair long, got my first tattoo and was
living with a bunch of bikers, The Southern Riders. I was really not heading to a good place.”

In 1989, he packed up and moved to Music City. Five years later, Rhean hit rock bottom, got sober, found his faith, picked up the guitar again and started writing songs. He has already had his works recorded by Lee Greenwood, the Canadian band Doc Walker and others. In 1995, Rhean married Tonya and they are raising their children Daniel and Renee. Tonya is a music and drama teacher at McClain Christian School and they live in Lebanon.

The three families attend church together and camp together. And when they are not touring and attending award ceremonies, they are raising their families here next to ours. As Rhean put it, “we feel very blessed and fortunate to get to do what we love for a living. The music that we love to play and share has allowed us to travel the country, meeting wonderful people and seeing amazing things but there’s still…no place like home”.