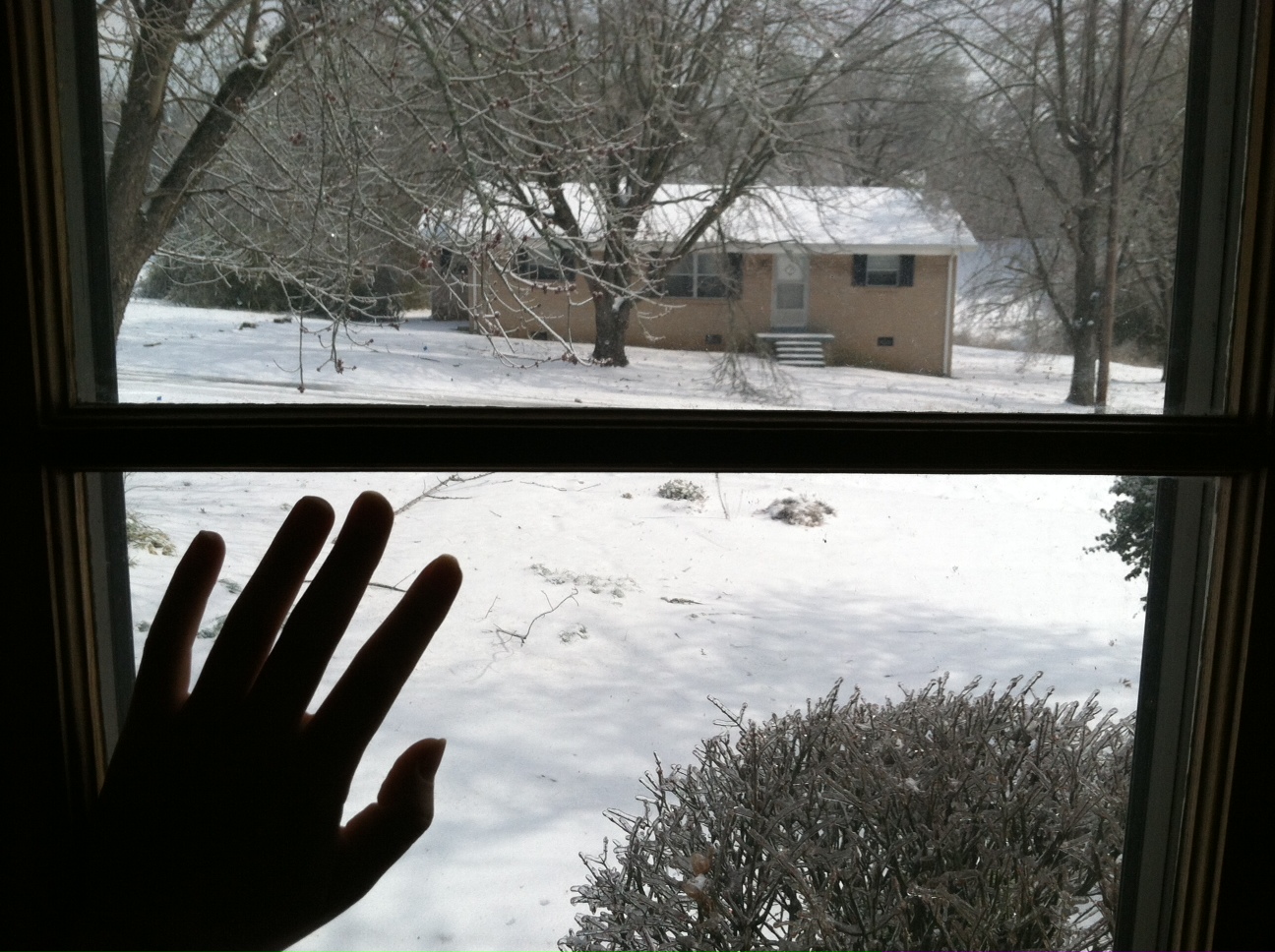 Woke up this morning and the sleet had iced over our driveway and cars completely. Will still try to go in to work and make every meeting I had planned. Justin is going to work—no problem.

I said I was going to work but I hadn’t tried to walk around outside yet. I am not crazy. I will stay home today. Justin went to work and he was one of two employees who made it.

The snow has begun in earnest—will it ever stop? There must be a full inch accumulated out there. The last time I remember it getting this bad was in 1993.

The power went in and out a few times. Later on it went out completely, and has been out for forty minutes. I have been forced to get off the internet and put another layer on.

Justin is back home—they lost power there as well. We are going to brave this storm together, and if either of us dies, we’ve agreed that cannibalism is not ethical.

The power is back on. The snow is now up to three inches, and looks like it’s stopped. But no one is going anywhere; everything is quite frozen. Except UPS did make it here with a package from Amazon just now—what a relief. Could be the last delivery of books for a while, and it has to get us through this storm.

We had a good supper, but of course it could be the last for a while. I almost had Justin run down to Sonic and get me a burger while the power was off and I couldn’t get anything hot to eat. Then the power came back on before he was done with his other errands.

We watched an Amazon Prime movie tonight, here at the compound, and at times internet was so slow that the picture was a little blurry. We might need to start conserving our oxygen as well.

Tennessee has declared a state of emergency. Justin was told not to go in to work (well, duh!). I spent the morning arranging things in the baby room, and pretended to go into labor a few times just for fun (Justin didn’t think it was funny, though; I think storm is probably starting to get to him. But we must do what we can to keep up morale, I think).

We ran out of cottage cheese and bananas at about ten o’clock, and there are only a few eggs left. Justin says that he will brave the cold to get to the Piggly Wiggly down the street—walk there, if he has to. I begged him to reconsider—there is still cereal left, and the other groceries in the fridge should last us for a week or so. But he doesn’t think we can make it without eggs, and secretly I know he’s right…

Being holed up here is starting to get to us. Justin has been reading quietly in his office for a while now—probably to hide his desperation. I find myself peering out the window from time to time. I wonder if anyone is out there? I wonder if anyone else is clinging to the life they knew?  It’s the not knowing that really hurts. Of course, when I get back on Facebook, I see enough evidence of survivors to comfort me somewhat—photo albums of kids sledding, statuses about cocoa, and Instagram pictures of footprints in the snow.

Perhaps there are others out there. Perhaps we’re going to make it through this after all… perhaps, somewhere out there in the great white, another family is huddled in a snowbank, clinging to life.

If not, Justin and I plan to propagate the species.