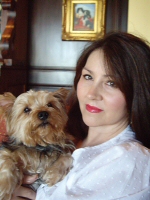 The holiday season is traditionally a time for food and family (and sometimes preferably in that order), and for novelist, blogger and food-lover Michael Lee West, home is definitely where the heart is. And that is only one of the many reasons she spends so much time on her Lebanon farm crafting novels that reflect small town charm, character and the occasional ‘crazy lady’.
“While I was writing my first novel (Crazy Ladies), I morphed my hometown, Cookeville with Lebanon,” West said when asked if the setting of the novel was loosely based on Lebanon. “After a while, the imaginary city of Crystal Falls took on a life of its own.”

Holiday traditions for West began in the dime store her parents owned as a child, a center for socializing in the small town. “My parents owned the local dime store. At one time, the Ben Franklin was the only place in town to buy toys, and they worked long hours,” West shared. “When I was tall enough to reach the gift-wrap counter, I pitched in, too,” she added.

“On Christmas Eve, our family would get home at 10 p.m. We’d eat a late supper, open presents and go to bed. My father was a native of Biloxi, Mississippi, so every Christmas Day we made his favorite soup, seafood gumbo,” she recalled.

West has carried on that Louisiana tradition into the holidays with her own family, including her husband, Dr. Willard West, and sons.

“Christmas morning, we read the scripture Luke 2:1-20. The menu varies, but I always make gumbo, in honor of my late father. I love to make gingerbread men, too. When I’m not writing, you can find me in the kitchen, but I’ll especially be there during the holidays. We spent one Christmas in London, and I discovered the British ‘crackers’, little, toy and candy filled cylinders that make an audible pop when you open them. So I make my own crackers too,” West said.

As far as decorating her home, West explained, “I like to add a bit of whimsy – snow globes, gingerbread houses and unusual ornaments dangle from the dining room chandelier. I also place a Farmer Santa in the den, in honor of my dear farmer-doctor husband.”

West shared that her favorite holiday recipes are the gumbo and Tabasco pecans. She explained that her paternal grandmother was born on Avery Island in Louisiana, the home of Tabasco. “Our whole family loves it. My mother, like so many Louisiana mothers, added Tabasco to my baby bottle,” she stated.

From a spicy Southern island to the hills of Middle Tennessee, West now not only calls Wilson County home but also loves to showcase it to others.

“When editors from New York visit, we take them to lunch at Sunset [Restaurant]. This landmark café gives our friends an instant feel for Middle Tennessee, from our manners to our cuisine. We love to drive through the Fairgrounds during Christmas to see the lights and also tour the light show on Highway 109. We love the Chop House and the history it has preserved, along with extraordinary food, but we also love Snow White Drive-In. Mainly, we love to drive around Wilson County. The rolling hills nourish the soul,” West said.

West said that Wilson County is a major source of inspiration for her writing, which includes the novels Crazy Ladies, Mad Girls in Love, American Pie, She Flew the Coop and Mermaids in the Basementin which she shared some of her recipes and inspirations as a writer.

“The landscape is a neverending source of wonder. I love the mountains, the climate, and the people,” West exclaimed. “I don’t think any southern writer can separate location from his or her words. Geography is embedded in each page. The customs, the language, the rhythms of small town life shape a writer’s outlook and that outlook becomes part of the story.”

West combines her love of writing and food with her blog, “Designs by Gollum”, which she started after a book tour in 2008. The blog, which she called “like playing, a creative escape,” highlights cooking, tablescapes and home décor with Michael’s own brand of humor and style.

West, a popular regional author, stays busy with her legal pads and black Flair pen, tools she uses to write each novel out in longhand before typing “the whole mess”. Her most recent novel, Gone With a Handsomer Man, will be reissued in trade paperback on February 14, 2012, and A Teeny Bit of Trouble will hit the shelves in April 2012. Trouble is the second book in the mystery series. On November 29, Acquainted with the Night, a scientific vampire thriller, will be published under a pen name, Piper Maitland (mass-market paperback, Berkley). She’s working on the third book in the Teeny Templeton Series, A Teeny Slice of Scandal (her editor came up with the title) and the second book in the vampire series.

But for the next little while, West will prepare to renovate an older home in Lebanon and continue reading design books … but not before getting in the holiday spirit with some of her favorite old black and white Christmas movies.

The novelist shared the previously mentioned favorite holiday recipe, Tabasco Pecans, which was passed down from her grandmother that consists of her own personal touch.

I make these savory nibblies every Christmas. I don’t have an iron clad recipe, just a procedure. Basically, melt a stick of real butter over a medium flame, then add a whole bunch of pecans (I used five smallish bags of pecan halves). Add 1/2 bottle Tabasco (adjust to taste). Add one packet of Good Seasons dry Italian seasoning mix — just sprinkle over the top of the pecans — and stir. Add minced, fresh garlic (if you like, I do) and keep stirring until the pecans are nicely coated. Sometimes I add Hungarian paprika. I always add coarse sea salt and freshly ground pepper to taste. If the pecans look a little dry, add more butter. It helps if you sauté the pecans in a large, ovenproof pan. I use copper. Then pop the pan into a pre-heated oven (325 degrees) and cook 20-25 minutes. Stir every now and then to make sure the nuts brown evenly. Cool, serve … and enjoy!