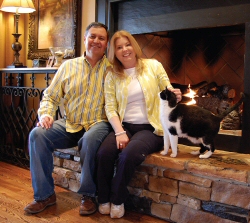 PHOTOS and STORY By KEN BECK

It’s all about family for Danny and Diane Stewart, who built their home on a plot of lakefront property that had belonged to Danny’s forefathers from the 1920’s into the early 1960’s.

“Dad had a 100-foot strip of land left of my great-grandmother’s old farm. The lady next door, Lorraine Wilson, had bought it from my grandfather in 1963 and sold it back to us in 2006 because Diane and I were going to build our retirement home here,” said Danny. “She said it was only right because the family had always had picnics and reunions here,” Diane remarked.

Since moving into their home in July 2007, the Stewarts have been making new memories on the very spot. Their three-bedroom, ranch-style house reflects Mediterranean detail. Inside, the floor surfaces feature tile, marble, a bit of carpet and mostly hardwood. The den and kitchen beckon invitingly with gas fireplaces, and each room presents a large airy space with an expansive view of Old Hickory Lake.

Marsha Jackson served as architect of the house, which was built by Jack Bell. Bell’s wife, Meleia, served as the interior designer. “It’s a basic open floor plan,” said Diane. “Every time we would go to Florida, we would like the coastal look, but we also like the Mediterranean look, so we blended it in between the two. We wanted it homey and not so coastal.”

“The number one goal was that when Diane was in the kitchen, she wanted to take advantage of the view out the back of the home,” Danny explained. “It’s pretty much all glass, so wherever you stand in the open area of the house, you can look at the water.” “By leaving the kitchen open, everybody feels like they’re in the kitchen,” said Diane. “Nobody wants to be in the dining room. They want to be right in here.”

Married for 31 years, Danny and Diane have two daughters: Danielle, 27, a nurse at UMC, who is married to Jason Black; and Bethany, 21, a senior studying nursing at Tennessee Tech. Via Danielle and Jason, the couple have a nine-month-old grandson, Aidan, who is the sunshine of their lives. The family also includes their cat, Patches, 17, and dog, Molly, 8.

One of the Stewarts’ favorite places in the house is around a long, pine table that seats 10. It was built to their specifications by James Bradford of Mt. Juliet.

Danny, 54, works as Chief Operating Officer of Advanced Propane, a company that he owns with his father, Dan, and brother, Ted. Obviously, in planning their home, he insisted on a variety of propane gas-operated devices. He’s most enthusiastic about gas furnaces and on-demand water heaters, which he said can provide hot water for three to four showers at one time, and, depending on

family usage, may save between 30% to 50% over an electric water heater in a traditional home.

“One thing Diane really enjoys is the gas range,” he told. “Ninety-five percent of professional chefs use gas to cook with over electric because the heat is better controlled. When you turn it on, it is already hot. It cooks more evenly, and when you cut it off, it is off.”

“I cooked with electric before,” said Diane. “I really like the gas better. It heats quicker. You would think it would burn because it gets so hot, but it  doesn’t. It cooks everything so evenly.”

She described her style as “just country cooking” as various family members favor such dishes as country-fried streak, salmon patties, pinto beans and cornbread. Danny pointed out that the house features a backup generator that runs on propane.

“We have the refrigerator, central heat and air, freezer and main lighting to the house, and, of course, my television connected to the generator. We can live 100 percent without an electric company, if necessary. We can go indefinitely as long as we’ve got gas.”

Danny’s father, Dan, and his brother, Ted, started the family propane gas business in the summer of 1992. Dan, called “Mr. Dan” by many, has been a farmer and entrepreneur most of his life. Born and raised in LaGuardo, he knows as much history about the community as anybody.

His grandfather, Walter J. Williams, died at age 45 in 1921 after a large limb from a tree he had just felled crushed his body. The accident forced his grandmother to give up their rich bottomland. “She just couldn’t make the payments,” recalled Dan, 76. “She loved President Franklin Roosevelt because he helped her salvage the farm by some of the things he did [with his governmental policies].”

While Mrs. Williams was able to keep 160 acres, the rising waters from the new Old Hickory Lake separated 60 to 70 of those acres from the rest of the farm as the lake rose to full pool in 1954-1955. The land lies near where Dry Creek merged with Spencer Creek, an area covered by the waters of the LaGuardo Recreation Area.

Dan’s late father, Charlie Stewart, was also a farmer and small businessman. From 1935 to 1943, he managed Prowell’s Service Station for a great uncle on Highway 70, near the current Franklin’s Market, close to Horn Spring Estates. In 1948, Charlie opened the original Stewart’s Grocery, and when Highway 109 was completed around 1955, he moved the store 100 yards or so east. That building is now home to Homerun Market and sits on the site of the old LaGuardo schoolhouse that Dan attended.

He and Bettye, his wife of 56 years, share four children, nine grandchildren and one great-grandchild as well as vivid memories of running the old Stewart’s Grocery.

“We had a pretty big grocery store. We sold everything, vegetables and meat,” said Bettye. “We killed about 40 hogs a week. I cured the hams from 1955 to 1970. We’d sell 2,000 hams a year. Of course, I didn’t kill them all,” Dan said. “It was a lot of fun because we met so many people and accumulated a lot of friends. But it was work and long hours. We didn’t work on Sundays, only six days a week,” Bettye said.

Dan spent more hours on the farm than in the store, as he, Danny and Ted raised tobacco and cattle. “We ran 100 to 150 head of cattle all the time. I remember in 1980, we sold 60,000 pounds of cattle and 60,000 pounds of tobacco. That was the best year we ever had,” said Dan, who has been president of the LaGuardo Utility District since 1976.

Danny began helping his mother and father in the grocery store when he was nine. “We did a lot of farming during my boyhood years. We raised tobacco, cattle, a lot of hay and had a sawmill. At the store I checked the oil and the air in people’s car tires, and we smiled when we did it. It was more fun than cutting tobacco,” he recalled.

After graduating from Gallatin High School in 1974, Danny earned an Associate Degree in Liberal Arts at Martin Methodist College in Pulaski, Tennessee. He met Diane, a graduate of Mt. Juliet High School, in 1978 at LaGuardo Baptist Church, where they married a year-and-a-half later.

Diane worked in retail management for 15 years before she quit to raise their youngest daughter. These days she enjoys making

crafts for her church, boating and puttering around the house.

“I have a pontoon boat,” she said, adding, “It’s the ‘mama boat’ because it goes slow.”

Danny used to water ski often but now favors taking out the runabout and jumping houseboat waves. His other hobbies include golf, target shooting and messing with his 1974 Charger SE Brougham with a 440-magnum engine.

Danny runs Advance Propane on a day-to-day basis. At peak season in winter, the company employs 15, including five Stewarts: Danny and Ted, and Ted’s sons, Chuck, Luke and Andy.

“Ted’s best skill is probably the operations, the mechanical and the customer service side of things. He is one of those guys who can fix anything,” said Danny. “Another one of the things we do when times are better is real estate development.

Ted can walk out on a piece of property and look at it by eye and tell you how the property should be developed, how the roads should be cut and the lots laid out. He’s amazingly gifted in that area.”

Danny’s career in banking began in 1979 with Commerce National Bank in Nashville. “My first job was repossessing cars, and I moved through the ranks, and I was Senior Banking Executive of Nations Bank of Sumner County (before it became Bank of America) when I left in 1996.

“The family business was going on in 1992 with Advanced Propane. I was helping Dad and Ted with that. It got to the point that I was spending about as much time on nights and weekends with the gas company as I was with the bank. And I had two jobs and no family life. “Something had to change. In 1996 I elected to go with the gas company and try the self-employed route, and, thank the good Lord, it’s worked,” said Danny, because, after all, family is what’s most important to the Stewarts of LaGuardo