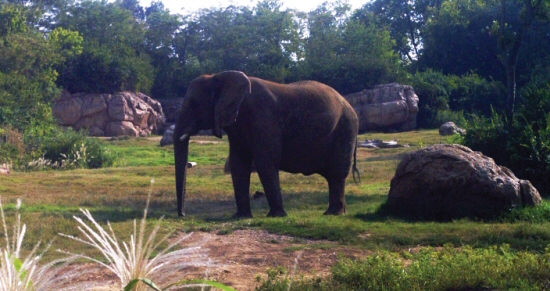 Visiting the Nashville Zoo at Grassmere

As you walk along the path you strain to see through the heavy foliage and thick underbrush, you can hear the sounds of strange creatures all around you, the peculiar squawks and growls from unknown beasts only yards away. It is then that the jungle begins to open, and you notice a clearing up ahead. In the distance you see the massive mammals as they water themselves near a well used watering hole. You take a deep breath as you watch the elephants slowly depart, making their way over the gently rolling Tennessee hills. Wait a minute. Did I say Tennessee?

That’s right, you don’t have to travel thousands of miles to experience the African savanna, or the dense forest of South America. A safari or jungle trek is just a far away as a trip to Nashville, where one of the nation’s newest and most expansive zoos is being developed.

Located just off Nolensville Pike, The Nashville Zoo at Grassmere offers a variety of exhibits with animals from all over the world, but there is much more available for both young and old alike. The zoo features a Jungle Gym playground, which is largest community-built playground in the United States, and also features the historic Croft home which highlights early Tennessee life and history.

“We’re actually one of the newer zoos in the country, if not the newest in the country,” said Marketing and Public Relations Director Jim Bartoo. He explained that the history of the zoo has given the Nashville area a unique opportunity to develop a zoo unlike many across the United States.

“We originally established in 1990 on a property in Cheatham County, in the Joelton area. It was on about one hundred acres. At the same time there was a zoo located on this property, called the Grassmere Wildlife Park. The Grassmere Wildlife Park operated for about four or five years, until they were no longer able to sustain themselves. That group was the same group that operated the Children’s Museum of Nashville, now the Adventure Science Center.”

Bartoo explained that a local Nashville family donated the Grassmere land. “There were two sisters, Margaret and Elise Croft, that lived on a house that is located on this property. They had moved into that house after moving back from Cuba. Their father was invested in sugar plantations in Cuba,and was doing pretty well for himself until Castro took over and took it all. So, the twomsisters came back, without a lot of money. They tried to work and farm the land, but they were finding it hard to meet their taxes on their 450 acres of property.” Bartoo explained that the sisters made a deal with Nashville that would later lead to the development of the zoo. “They struck a deal with the city to live here, tax free, until they passed away, and at that point all of the property would be handed over to the city. A portion of the property would have to be used as a nature study area, that was one of their stipulations. When the last sister died in 1985 the property was handed over, and the city asked the Cumberland Science Museum to develop a wildlife park or a zoo. They sold approximately 250 acres of the 450 acres raise money to be able to build the wildlife park. The park opened in 1990.”

“After a few years they weren’t able to sustain the operation of the wildlife park so they handed the property back over to the city. At that point the city asked the Nashville Zoo to relocate from Joelton, down to the Grassmere property. That happened in 1996, and we opened to the public in 1997.”

Basically starting from scratch, Bartoo told how the Zoo at Grassmere evolved into a zoo that differs from other metropolitan zoos. “When we opened there wasn’t a whole lot here, so we’ve basically been building a zoo from the ground up since 1997. We now have 187 acres, with part of the property going to build a middle school, and most of it is untouched. We are able to build a zoo using the latest philosophies and exhibit designs. If you go to a zoo in a major metropolitan area, every large city has a zoo, and typically those zoos were built during the early 1900’s or post World War II. What you see at those zoos are a lot of old structures; a lot of old buildings. Many are building new exhibits, but when they build something new they have to tear something down. What makes our zoo unique is we have undeveloped property.”

Because it is a new zoo, and due to the large acreage, the zoo has been able to produce a more natural environment for some of its animals. Bartoo said that rather than cages and confined areas, the Zoo at Grassmere offers a more natural environment for both its animals and visitors. “There’s a lot of trails, a lot of treed walkways, and a lot of wilderness between the exhibits themselves. It isn’t wall to wall animal exhibits. It’s kind of spread out because we’re so new, and we kind of dot the landscape with animals. And, we still have probably 100 acres that is undeveloped, that we haven’t done anything with yet.”

“We’ll eventually be adding several different areas,” Bartoo continued. “We are right now looking at an expansion of our African area to include a bigger African plains that will include an African village and a big pavilion, or indoor meeting space with a lodge, with classroom opportunities “We have a similar build structure for a South American exhibit that will include an indoor rainforest that people can walk through. That will be immense as well and will include several hundred species within the building itself as well as animals on the outside.”

While the zoo continues to grow, Bartoo said the facility currently offers a wide variety of species for visitors. “We have lots of different bird species; very unique looking bird species. There are all sorts of amphibians, bird species, reptiles and fish. We have a couple of primate species, although not as many monkeys as you would expect to see when you come to the zoo. We’re still very new in that aspect.”

“One of our most endangered species we have are our clouded leopards, with cubs on display right now. We also have giant

The zoo not only offers a variety of wildlife, but also a wonderful history museum in an early Tennessee home that predates many other homes in the area. “The Croft home, the home the sisters lived in, is a beautiful representation of history,” Bartoo said. “Ninety-five percent of the stuff in the house is unique to the house itself. The home was built in 1810, making it older than The Hermitage. The sisters were also pack rats with everything that they collected from the 1800’s, so the house is just full of all kinds of antiquities. A tour of the home is included with admission to the zoo, and it really gives a good overview of what farm life was like back in the 1800’s.

The whole setup on the farm is very unique, and it gives you a good idea of what happened on this property over the centuries and how that played into the zoo’s development today.”

Throughout the year, the Zoo at Grassmere offers special programs and events for families and schools. Bartoo told how the zoo strives to make a difference and give back to the community. “We have all kinds of special programs for families. On November 12th we have a program we call Meet Your Best Friend at the Zoo, which is a huge pet adoption fair we have in our parking lot. It’s a big dog and cat adoption fair, and we usually have five or six agencies that bring all their animals out.”

“We have a Military Appreciation Day that we hold that following day, November 13th. It is held around Veteran’s Day, and we were fortunate to have a sponsor help host it on a Sunday. On that day all military and their families are welcomed for free at the zoo.”

Bartoo also said the zoo hosts the city’s largest egg hunt every year. “It’s called Extravaganzoo that always happens the Saturday before Easter. We also have the city’s largest Halloween festival for families, which is called Ghouls for Grassmere. That happens three weekends in October.”

The Education Department offers education programs throughout the year, and includes a Tots class for preschool kids, and Summer Camp programs. “There are also programs for local schools,” Bartoo said.

“If a school wants to come out and visit the zoo we can add education programming onto their school visit if they want. There are also online resources available for teachers to tap into. Instead of just letting their students loose when they come out, there’s a scavenger hunt they can do while they are here and other educational components they tie in to make their visit much more worth while.”

No matter your age or interest, chances are the Nashville Zoo at Grassmere has something for you. For more information visit www.nashvillezoo.org or call 615-833-1534