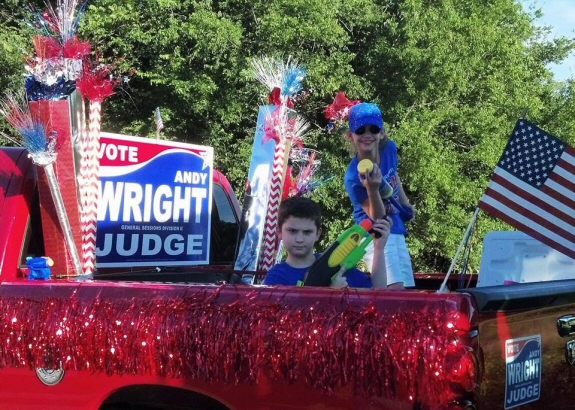 Nothing says small town America like a good ole’ fashioned parade. And on the 4th of July many of the candidates gathered in Watertown for a parade on Main Street and through the town square. If you haven’t ventured out to Watertown for their parade, then I suggest next year you make plans to attend because theirs is like no other.

I’m not sure who came up with the idea but it seems right for the Watertown parade to consist of ….water and lots of it. The idea is to pretty much soak the participants as well as the attendees. It’s basically war as water is flying out of high powered water guns or straight from huge buckets. Those in the parade fight back with their own arsenal.

Some candidates like Team Andy Wright ventured into the wet zone, while others like Bud Brandon preferred to meet folks from the no splash zone.

Needless to say the weather was beautiful and everyone enjoyed the festivities. Some were just more wet than others!

After the parade, everyone gathered on the town square for speeches from the candidates as well as the auctioning of some delicious cakes made by many from Watertown.

Later that night as I looked at my photos of my kids and I in the parade, I thought to myself, ‘what an awesome memory’. As we had travelled down Main Street we saw people sitting on their front porches waving and smiling. Many of those same people later walked down to the town square (only minutes from their homes) to listen and learn about the candidates. And at the end of the day, many left with a freshly baked caked prepared by one of their neighbors.

The 4th of July is a day of celebrating America and it’s freedoms – I can think of no better way to have spent it than as we did.

Click Here to see some great photos from the Parade.