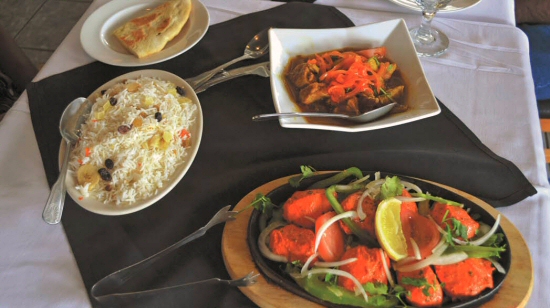 Pictured above are some of the tasty menu items including Chicken Tikka, Chicken Roganjosh, and a Kashmiri Rice dish with mixed dried fruits

Are you aware that you can reduce your chances of getting cancer and even Alzheimer’s if you regularly consume a diet rich in turmeric, saffron, and cumin, spices commonly found in various types of Indian curry dishes? I certainly wasn’t until Sam Arefin, owner of Shagor Indian Cuisine in Mt. Juliet, informed me of this. I began to research it online and he’s right. A recent feature on the The Huffington Post website had this to say: “A host of studies have shown that turmeric, the spice used in curries, and its main active component curcumin, can help prevent Alzheimer’s. In one such study, researchers from UCLA found that vitamin D3, taken with curcumin, may help the immune system to get rid of the amino acids that form the plaque in the brain that’s associated with Alzheimer’s Disease.”

Mt. Juliet’s one and only Indian Restaurant, Shagor, offers dine-in and delivery options. Their full menu, including descriptions of the foods and the health benefits of Indian cuisine, can be found online at www.shagorindian.com.So there you go: bring on the curry!

Shagor offers what is known as British curry standard menu. Indian food is extremely popular in Britain and each year, the British Curry Awards Show in London is a gala event that rivals our Oscars and Grammies, and has even attracted the Prime Minister of England. “We use a lot of curry spices on our menu, but a lot of my specific recipes are a secret, too” Sam says.

“And we also can serve the entrees at any level of spiciness, from mild to hot or extra hot, so people don’t have to worry about the food being too spicy unless they want it that way.”

Sam Arefin grew up in Bengal, India, but has lived in Middle Tennessee most of his life. He opened Shagor Indian Cuisine, Wilson County’s only India restaurant, two years ago. “I’ve worked in food service most of my life and that helped a lot as far as learning to manage the business,” he says. “I’ve also spent a lot of my life cooking, too, but a friend of mine who is chef helped me develop the menu at Shagor and helped me open this restaurant.”

Shagor has a lunch buffet Saturdays and Sundays from 11:30-2:30, and is open for dinner Tuesday through Sunday evenings from 5:00-9:30 pm. Popular items on the lunch buffet include Tandori Chicken, Curry Lamb, honey balls, basmati rice, salad, and rice pudding for dessert. “The lunch buffet is a good way to sample several things off the menu so people can know next time they come in for dinner what they want,” Arefin says.

Owner Sam Arefin takes pride in serving his homemade Indian dishes to his patrons. Saag Panner (a spinach and cheese dish), a Mixed Vegetable Combo Platter, and even some unique items like Chicken Tikka Pizza and Mushroom Polao. The dinner menu ranges in price from $7.99 to $17.99. “We have sixteen vegetarian dishes on the menu and seven rice and vegetable dishes,” Arefin says, “so there’s something for everybody.” You can wash your meal down with a variety of sodas, mango juice, Indian Spice Tea, or Indian Lemonade. If you want wine with your dinner, though, you need to bring it with you and your waiter will be happy serve it, but at present, Shagor does not have the 95 seats required for a permit in Mt. Juliet. This summer, Sam plans to possibly add an outdoor patio with additional seating.

Scotty Hudson, a regular at Shagor, lost more than 50 pounds and overcame IBS and his acid reflux by eating a diet that includes many of the foods found in Indian cuisine.Scotty Hudson of Mount Juliet is a regular at Shagor and knows the health benefits of a curry-rich diet first-hand. Hudson says he has been on a Paleo diet for a year and has lost almost 60 pounds. “I also used to suffer from acid reflux and irritable bowels until I started eating more curry,” Hudson says. “Now I don’t have any problems with either. And I recently went off grains altogether, too, and my allergies went away.”

Arefin says he also has catered quite a few events for churches and weddings as well. He says he actually gets a lot of business from places like Gallatin and Springfield and Nashville, but hasn’t attracted the local business at the level he would like. “People need to know the food,” Arefin says. “People around here are comfortable with eating at Mexican restaurants but a lot of them still don’t know much about Indian,” he adds. “A lot of our dishes are not that much different. Our Chicken Tikka dish is similar to fajitas; they serve fried rice and we serve basmati rice; Mexican dishes come with tortillas and we serve naan bread, which is not that different. But the main thing about Indian is that it’s really about the nutrition and the health benefits as much as it is about taste.”

Be sure to visit shagorus.com or shagorindian.com for their hours of operation, testimonials, and their fully detailed lunch and dinner menus.