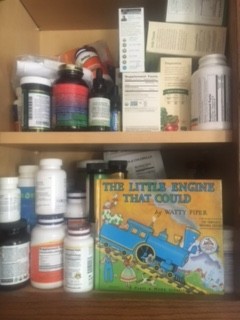 I have a leaky gut caused by systematic Candida. Sounds gross, right? Before you say TMI and stop reading, just know that we all have yeast and other bacteria in our gut and it’s actually a very good thing.  Until it becomes a very bad thing.

I decided to take charge of my health when I was pregnant with my son. I switched to a Paleo lifestyle, cutting out gluten and most processed foods and dairy; eating organic whenever possible; and limiting chemical exposure (cleaning products, shampoos, makeup, etc.).  To the casual observer I looked perfectly healthy, but I felt absolutely terrible the majority of the time. I had chronic unexplained stomach pains, other digestive issues and pain and inflammation in various parts of my body.  Not to mention the seemingly unexplained flair ups of my autoimmune disease alopecia areata.

After a few months of following a Paleo lifestyle, many of my symptoms disappeared and I thought I’d found the answer.  And then the other shoe dropped (doesn’t it always?).  I got a vicious case of breastfeeding mastitis when my son was two months old, leading to a mega dose of antibiotics. No big deal, right? Wrong. Unfortunately, while antibiotics do their job in killing an infection, they also kill good bacteria too, and that’s when the gut flora can get out of balance.  The medical profession is just now realizing the importance of gut health; with about 70 percent of our immune system residing there, one can understand why a healthy gut is so important.

Looking back now I see that it probably wasn’t just the one infection and one round of antibiotics that caused my cascade of health problems.  It was a lifetime of willy nilly antibiotic use.  It was not eating enough vegetables (Yes, your mother was right to nag!).  It was fast food and Coke.  It was pizza and beer on Friday night.  It was drinking chemical laden water from chemical laden plastic bottles.  It was too much stress.  It was too much sugar.  It was the cumulative effect of not taking care of my body for many years, and now it was time to pay the piper.

I finally went to a functional medicine specialist and after a series of tests, the conclusion was gut dysbiosis of the small intestines. My good guys were low in number and the bad guys had set up shop in my small intestines via my gut permeability, hence the term leaky gut.  The bad guys being primarily Candida, which explained the excruciating breastfeeding pain and thrush diaper rashes that both my children just couldn’t shake, along with a laundry list of other Candida related may lays: food allergies; migraines; body aches and pains; chronic fatigue; a mystery face rash; brain fog; random nose bleeds, the list goes on and on.

My supplement regiment went from a multivitamin to an entire alternative medicine cabinet full of herbs and vitamins dedicated to gut healing (along with other holistic protocol measures that really are TMI…).  I started on a strict autoimmune elimination diet, removing nuts, seeds, all dairy, nightshades (tomatoes, peppers, spices, etc), and all sugar, with the goal being to figure out which foods were causing reactions and eliminating those to allow my body to heal.   It’s been the hardest thing I’ve ever done, both mentally and physically.  It’s also as boring and monotonous as it sounds.  Anytime I’m at an event/family gathering, food is going to be the focus.  We’re in the South, for goodness’ sake!  And inevitably, I’ll be asked 20 different times by 20 different people why I’m not eating, and my honest reply that “Candida has destroyed my gut villi, set up shop in various parts of my body and is systematically destroying my health” really isn’t pleasant dinner conversation!  It’s honestly easier to just stay home.

I was seeing slight improvement in my symptoms until a vacation and that damn cronut. You remember the cronut craze? A croissant and doughnut had a love child, the cronut. The sad thing is that I didn’t even eat the cronot. Let me explain. My family and I were at a farmer’s market, a veritable smorgasbord of baked goodies and fried delicacies. I’m still on my super boring healing foods regiment when I spot the cronout. I white knuckle it right on by and instead go for an acai fruit bowl, another food craze of the moment. Sure the acai fruit bowl was good, especially to someone that had been abstaining from fruit, but what I really wanted was that cronout. And old diet for weight loss habits die hard. So, I wind up later in the evening hiding in the bedroom gorging on my husband’s jumbo bag of peanut M &Ms (don’t judge!), and peanut M & Ms were never that great to begin with!  Had I simply eaten that cronut the sky would not have fallen and I would still have been on my path to healing instead of taking the crazed detour of eating a jumbo bag of mediocre candy with a migraine to follow, just to add insult to injury!

Confession is good for the soul, but what is good for the gut?  All I know is that I want to be able to fully enjoy my wonderful children, so I will take the attitude of the Little Engine that Could, my daughter’s favorite book of the moment: I think I can, I think I can, I think I can heal my leaky gut!  Who knows, maybe one day I’ll be riding a train, enjoying a delicious cronut without looking like I ran head long into a hornet’s nest, chanting “I thought I could, I thought I could.”  I’ll pass on the peanut M&Ms, though.