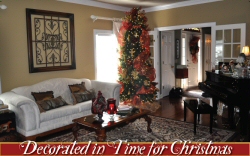 Take a drive into the Southfork subdivision and all of a sudden you are on Memory Lane. Not too far back on Memory Lane, but just far enough to reminisce about the Barnes and the Ewings. This well-known subdivision, with its street titled after the main characters of the unforgettable hit television series “Dallas”, is home to some of the most beautiful houses in the County.

And this subdivision is where Elizabeth and Barry Scruggs have made their home. A home that took time and effort to come together, but once complete was perfect for this growing family.

Barry, a native of Carthage and graduate of Cumberland (when it was a two-year college) and later MTSU, remembers Lebanon and this area “when it was nothing but wide open fields.”

“My father was the Smith County Court Clerk and my mother ran the Senior Citizens Center in Carthage. Coming to Lebanon was a treat because to us, back then, Lebanon was the big town,” said Barry with a chuckle.

Today, Barry is a well-known car dealer in Lebanon. Owner of Superior Motors since 1987, Barry can be found on his car lot each day taking care of his customers. “I don’t do much advertising. What I’ve tried to do instead is build relationships, be honest and sell cars that I would want my family to be driving. It seems to work because the same people keep coming back.”

Elizabeth moved to Lebanon when she was 12-years-old. Raised single handedly by her working mother, she and her brother came to the area to be closer to family. “Barry and I both came from rather humble beginnings, but our parents were very good examples of what hard work and perseverance could accomplish.”

Married since 1991, Elizabeth and Barry have two twin girls, Mia and Macy, and a son Max. They also have Barry’s older children, Alex and Matt, and recently welcomed the families’ newest grandchild, Elsie Kate Scruggs, who just turned one.

As Elizabeth related, “We sold our last home in 2007, right before the housing market started to change. We had two weeks to find a new house. I couldn’t find anything I liked and then, one day, we found our … home. The house, at the time, belonged to Lane and Melinda Martin, who had been college friends of Barry’s. It had been empty for eight months, and it only took one look around for my husband to say ‘you are not going to be happy until we buy this house, are you?’, and he was right!”

Although built in the 1980’s, the home had many amenities often included in newer homes. All the rooms and hallways are large. There is a room off the laundry room that is perfect for a mudroom. Each of the bedrooms has walk-in closets. “But what really sold us on the house,” explained Barry, “are the two girls’ bedrooms upstairs. The Martins have two beautiful daughters and had raised them in this house, in those rooms. I could see our girls being raised in the same way.” Elizabeth added, “The home was built by Tony Watson, so I knew it was built well. And Lane and Melinda built another beautiful home in Southfork, but their girls have come by to see their old rooms, and one even remarked that ‘all my dreams are in this house’. That is how I feel about it too. She told me, when she dreams, she dreams about being in this house. Their stories about growing up here made me want to buy this house.”

But, of course, what really sold them on the house, was that it had great bones. And with Elizabeth’s talents, hard work and know-how, the house was transformed into a modern showplace. Elizabeth, you see, had already found that her calling was in construction, long before finding this house. “I built my first house in 1995 when I was 25 and fell in love with building. I’ve always loved organization and design and building combines both of these things. I sort of toyed with the idea of becoming a full-fledged contractor until I finally decided to take my exam and get my contractor’s license in 1999. I opened my company, Superior Construction and Design in
2000 and things really took off. Thankfully, I had the benefit of having several good friends that had been long-time builders. I watched what they did, listened to their advice and learned from the best around.”

The Scruggs’ home has been remade from the inside out. The couple added new windows in the roofline upstairs, added additional closets, new windows downstairs, new HVAC, new carpet, new wood, new tile and granite along with a complete remodel of the master bath. “Pretty much every part of the house has slowly been redone from the popcorn ceilings being scraped off and wallpaper being taken down, to the floors being refinished.” And Elizabeth is a master at decorating. “I love to decorate for the holidays. It gets me into the holiday spirit, and the kids just love it. In addition to that, I am an avid collector of art, antique furniture and, of course, Santas,” she noted, standing beside the baby grand piano that sits in the front living room, where all her Santas are displayed.

The home is a warm and inviting with its deep paint colors and grand lighting. And it reignited Elizabeth’s passion for construction. But like many people, there came a time, where even the best laid plans, take a U-turn. “I was in the middle of building my youngest stepson’s house, when I had my twin girls two months early. The house was nowhere near finished, and I was trying to finish his home and take care of two premature babies. At that point, I decided to slow down for a while.”

Cut to a few years later, and once again Elizabeth was building a home when little baby Max came along. “I realized I was spread too thin and needed to find a way to do what I loved but also be there for my growing family.” In that moment, a new inspiration hit. “I’ve always been extremely organized – you have to be in construction – and have loved helping others over the years organizing themselves, so I decided to move the company into the direction of professional organizing and re-design. Sometimes, this entails small remodeling projects, and other times it entails me and my team going in and redesigning spaces. But what I love is that I get the same satisfaction from these smaller jobs that I do from a large scale house. I just get it faster! I can finish a job in days or weeks, instead of months.”

Elizabeth is also known for her decorating talents and has recently expanded her business to decorating homes and businesses for the holidays. “In addition to my organizing, remodeling and decorating business, I also do sales on the side. With my decorating contacts, I’ve established relationships with wholesale gift companies who don’t sell their products in this area. With the popularity of social media and my website, I’ve started selling their products for them. I can really help people find great decorative and gift products at great prices.”

So, suffice to say, with three young children, two very busy businesses that are growing by leaps and bounds, Elizabeth and Barry stay on the move. “I couldn’t do all I do though if it weren’t for the support of my dear friend, Denise Moore, who is my biggest cheerleader, and my children’s second mother. She takes care of my babies when I’m busy doing all these other things I love to do. God has blessed me in many ways, and I hope to use what I have to honor Him.”

To learn more about Elizabeth’s business go to www.superior-construction-and-design.com or call her at 969-3354. And with the holidays fast approaching, Elizabeth can transform your home, just like she has transformed her own.