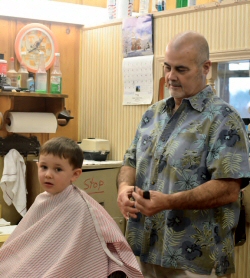 There are few symbols as nostalgic as the red, white and blue stripes of a barber shop pole. Seeing it today as I drive around the square always reminds me of days gone by, some I was part of and some that were before my time.

A trip to the barber shop is a rite of passage for many young boys and their fathers. Among my earliest memories in Texas are accompanying my dad to the local barber shop, sitting on the wooden board so that I’d be high enough for the barber to reach my head, having my hair cut while my dad was having his sideburns trimmed, a staple of the day. We’d usually then run errands and top it off with a trip to the local drugstore for a chocolate Sundae or shake.

In later days we’d either go see Bratton Barrett on the Watertown square or Randy’s Barber Shop on West Main in Lebanon. When I was in law school in Memphis, I had my hair cut regularly by an elderly man who had cut Elvis Presley’s hair in his younger days. He had some great stories to share, as many barbers do.

When we had our youngest child, Neill, our boy, I finally had the chance to do with him what I had done with my dad, Bernie, so many times. The first time I took him to Pop’s Barber Shop he was hesitant at first, fearing it would hurt, he’d cry and beg to stop. Eventually, of course, the strangeness wore off and he would have no complaint. Thereafter, his ever present tendency to talk and move his head were the only impediments for poor Joe Hodges.

While the price of a haircut may have gone up and styles have changed, other than that, it’s still a matter of walking in and preserving your place in line, be it by signing a sheet of paper at Joe’s or simply keeping an eye on the order of everyone else’s entry, as is followed at Dwight Huddleston’s Barber Shop. The waiting is the best part as no matter where the clientele is in the conversation, you can quickly join in, be it politics, sports or the latest hometown gossip, and when it’s finally your turn the conversation turns to you and yours.

The last time I walked into Pop’s, I learned that Joe would be moving. The building on West Main will soon be replaced with a drug store. And while I appreciate progress, part of me is saddened by the fact that I no longer will be returning to this place where Neill and I (and Joe) have shared so many years. While Joe will continue elsewhere, and Neill and I will follow, it occurred to me as we sat there for the last time, talking about football and local politics, that Joe and the other barbers in town have become to me, a comforting constant in an ever changing world.

When I was young and my father would take me to Randy’s or Bratton’s, these fine men had no problem letting me join in their adult conversations. I was part of the big boys club, a feeling that is like no other to a 7 year old boy who wants nothing more than to be big like his dad.

When I moved away for school, the small Memphis barber shop I found close to campus, felt very much the same as walking right back into Randy’s, an indescribable feeling to a young kid who was finally on his own, but wasn’t quite as sure of himself as he liked people to think.

And these days when Neill and I get a hair cut on Saturday mornings, it’s a good feeling knowing that this experience, that he and I often make into an occasion, will leave a lasting impression on him. One that he can find comfort in later, when life takes him elsewhere.

No doubt, these men and women, who are just doing their jobs, probably don’t realize how much their time, talents and friendships have helped keep our area as solid as it is. They are the men and women who have preserved the memories of years past while being the starting point of new ones. They are a rite of passage, a constant in this fast moving world and they are, most definitely, Hometown Heroes

Joe got his start at Randy’s Barber Shop in 1974, before moving to Pop’s in 1980 along with fellow barber Sam Belcher, to join Buck Mason. After Buck passed away in 1988 Joe became the owner of the shop and continued to cut hair alongside Sam, until he retired in 2005.

Walk into Pop’s and you immediately know that Joe – likes the Vols. Scratch that – he loves the Vols!! The store is peppered with UT memorabilia, a fact that Neill and I have always appreciated because talking about UT football is a favorite past time for both of us, and there is never ashortage of that in Joe’s chair.

In fact, Joe’s love for UT was the source of a long running bet between he and long time customer Bobby McEachern. For over 30 years if UT won the annual Tennessee-Alabama game then Bobby had to pay double the cost, however, if Bama carried the day then Bobby got his haircut for free. Finally, Joe chuckled “I put an end to the bet,” due to Alabama’s dominance over his Vols.

Several years ago, while another barber distracted Bobby, Joe swapped out Bobby’s Crimson Tide license plate for Joe’s own Tennessee plate. Bobby, none the wiser, spent the next week driving around with the hated Vols on his plate. After a week spent with numerous people passing him by, while laughing, McEachern finally discovered the ruse. He knew immediately who had pulled the prank and called Joe telling him the Feds were now looking for him. And the ribbing continues to this day.

Kim is a Watertown classmate of mine who followed her father, Bratton Barrett into the profession. After trying college and then a 3rd shift job and not finding

her niche, Kim took her father’s advice and tried barber college. In doing so she found her calling 21 years ago and has never looked back.

She worked side by side with her dad cutting hair until he passed away. A self-described “daddy’s girl”, Kim tries to fill his large shoes. She laughingly remembers her father’s good natured complaints at seeing his long-time customers switch to her and leave her tips, something they had rarely done for him.

The barber shop was often a place where the men would come loiter and sit and talk to her father about farming, politics and life in general. Many of the men, like her dad, have since passed away, but the barber shop still remains a hub for local conversations.

After working alone since her father’s death in 2010, Kim will soon be welcoming her friend, Sonia Lamberson, to the business in the next few weeks. Times will be changing in some ways, but the conversations in the chair will remain the same.

Barrett’s Barber Shop is located at 306 Public Square in Watertown.

My friend, Dwight and I came to know each other during a stop for a quick trim. Dwight has operated Dwight’s Barber Shop in Lebanon for nearly 25 years. A one chair operation, Dwight began cutting hair in Alexandria in 1974 for $.75 a cut. He laughingly recalls even at that price he still got the occasional complaint from older gentlemen who’d tell him “I used to get a haircut and a shave for two bits”. Since then he’s had to raise his prices to keep up with his overhead but stopped the increases altogether several years ago.

The building has only housed 3 barbers since being built in 1953; J.T. Eddings from 1853 to 1973, Eddings’ nephew Ralph Young from ’73 to 89 when he died of a stroke and thereafter, Dwight took over. Dwight has now operated his shop there longer than any other. Back in the day “you had to apprentice and I did it for one whole year under Hobart Tisdale of Alexandria. It was an art, passed down from one barber to another.”

Dwight has mastered this art by way of his extensive clientele including Terry Ashe, Don Simpson, Bev Spickard, Judge John Wootten and the late Judge J.O. Bond, along with country singer, Trace Adkins. Not bad at all, for a one man dynamo.

Larry was the one barber I didn’t know well so I called on my friend, Yancy Belcher, to inquire who was Mt. Juliet’s Hometown Hero. Yancy immediately said

“you got to talk to Larry Capps.” And I have since realized why.

Larry has been cutting hair in Mt. Juliet since 1964 and knows everyone and everyone’s story. He was led to his profession by having had the misfortune of suffering a badly broken arm in a car wreck. While looking for some light work while his arm healed, he was directed to Tennessee Rehabilitation, an organization which agreed to pay his way through barber school and also paid for an additional surgery on his arm.

For almost 50 years now, Larry has had the good fortune of cutting hair and today does so alongside his daughter Robbie Capps. He recalls an occasion, years ago, when an obviously inebriated customer came in for a haircut, Larry cut his hair and sent him on his way. The following day the same customer came in again, sober this time, and told Larry to ‘cut it like you always do’. Larry chuckled and said he went ahead and did just that, as the man obviously had no recollection of the previous day.

Politics is a frequent topic of conversation at Larry’s and once when asked by a client if he was a democrat or republican he replied “it depends on who is in the chair.”

While Larry has probably cut every notables hair at some time or other, two he quickly mentions are gubernatorial candidate Lamar Alexander, during his walk across the state in 1978, as well as Mt. Juliet native and astronaut, Barry Wilmore, who even inscribed a photograph for Larry that proudly hangs in his shop

When I was young, Randy would cut my hair, so I thought it fitting that Neill get a Randy “cut” at some point in his life, as

well. He insisted on a buzz cut, a cut his Mother dislikes, but one Neill loves – claiming it makes him run faster because there is less friction. I’m not sure about that, but I know that if a simple buzz cut makes him happy, I’m probably going to let him get one, over and over again.

Randy has cut hair at his West Main location since 1969 and in Lebanon for a total of 51 years. Others who share his shop are Al Grisham who has been with Randy for nearly all of his 35 years in the business, as well as Bill Stephens, Chris Hallums and Zach Clemmons. Randy estimates more than 40 barbers have cut hair at his location at one time or the other. He notes that cutting hair is an ever changing proposition from the barber’s perspective, as changing tastes result in different requests but he continues to be up for the challenge. And Neill was one satisfied customer after getting his Randy’s famous buzz cut!