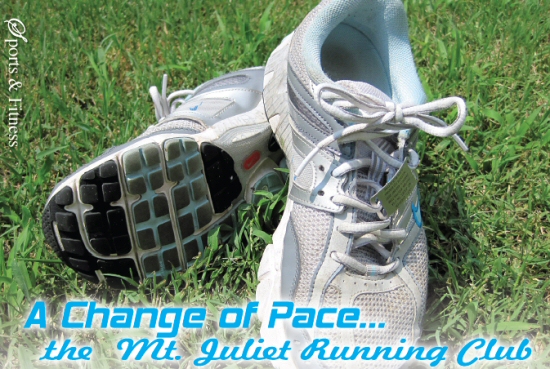 When Laci Chester lined up at the starting line of her first race in 2005, she assumed that since she was already a runner, she would smoke most of her competition. During the last mile, when she was passed by a lady pushing a dog in a stroller, she realized she had been wrong. While this wasn’t the greatest start to her racing career, it planted a seed in her that has lead to the formation of the Mt. Juliet Running Club.

Originally from Texas, Laci moved to Tennessee in 2002 to enroll at MTSU and pursue a career as an Air Traffic Controller. She met her husband while at MTSU, married him in 2004 and moved to Mt. Juliet. She is now a stay-at-home mother to her two children, ages 2 ½ years old and 14 months old. She has been running since college, but she noticed after moving to Mt. Juliet that the majority of races she could participate in took place outside of Wilson County. This inspired her to create a local running club that would hold events within Wilson County, particularly Mt. Juliet.

She also has a personal reason for starting the club. “Growing up, I saw the constant struggles a family member had with weight and health,” she said. “I REFUSE to let that happen to me. I wear a green silicone band that says ‘I run for my children’ as a daily reminder to live a healthy lifestyle. I lead by example and hope to leave a legacy of a healthy lifestyle to my children and others.”

For Laci, the biggest challenge in starting and leading the Mt. Juliet Running Club has been all of the behind the scenes work. She helped organize Ansley’s Run in Mt. Juliet in 2010, so she knew a little about organizing events and what to expect. “However, taking  on planning and executing my first run on my own was a little nerve racking!” she stated.

Laci is still learning the ins and outs of organizing races but hopes to get to a point someday where race days run as “smooth as water”.

Despite the challenges involved in organizing races, Laci states that the running club has received an overwhelming number of positive responses. There are Facebook and Twitter pages for the club (which can be found by searching for “Mt. Juliet Running Club” on Facebook and “@mjrunningclub” on Twitter). She stated that each day the following on these sites grow, and she receives emails daily about group runs or running events.

It is free to become a member of the running club, and Laci urges runners of all skill levels to join the running club, group runs and events. “ I know how intimidating it can be for new runners to join a group run where everyone else is much faster and can go further. I am more than happy to help anyone, regardless of fitness level.”

To find out more information about joining or upcoming events, visit the running club’s website at www.mtjulietrunningclub.com.