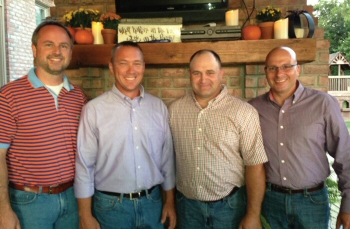 While little league baseball season was upon us this spring, I found myself in the bleachers watching my son and my friend, Meredith Bayse’s son, playing in

the infield together. While Neill and Kendal were chasing grounders, Meredith and I were in deep discussions planning our 25th Watertown High School Reunion.

If you had told me when I was 18 that Meredith Curtis Bayse and I would, some 25 years later, be sitting in a ballfield, 10 miles down the road from where we grew up in Watertown, planning this reunion, I would have told you…that’s exactly what I thought would be happening. Or more to the point, what I hoped would one day happen.

Don’t get me wrong, like every other graduating teenager in 1988 I had big, big plans, some of which eventually happened, others of which, only by the grace of God, did not. But like many that I know from this area, staying away too long wasn’t one of them.

I don’t know if there is something in the air or the water, but I find it doesn’t matter if you attended Watertown, Lebanon, Mt. Juliet or Friendship, while many of us may stray a little from home, when it comes to finding our way back, all roads lead to the comforts of long held memories and mama’s cooking.

This past September, 25 years later, my classmates and I, the 1988 Class of Watertown High School, gathered on my back porch to reminisce about the good times, to honor those who left us too early and to catch up on all that we had become. We could all agree that the 80’s were not the most outstanding decade. Unlike prior generations, most of us we were not heroes of a great war nor did we suffer through a major depression. Instead we stood at the forefront of what many of those prior generations had fought for – a time of sustained peace, economic optimism, and unimaginable innovation.

Montalban commercial extolling that model’s “rich Corinthian Leather” which failed to mention its 9 miles to the gallon fuel economy) listening to Def Leppard, Bon Jovi and Hank Williams Jr. Kevin “Spaceman” Roberts, Greg Allison, Ralph Bailey, Gerald Lamberson and James Vaden were among my running buddies and if I wasn’t working a shift at Wendy’s, we’d spend many a day swimming at Cedar Forest pool and night, riding the roads and hanging out at the Cherry Valley gas station.

I laugh now when I hear teenagers say they don’t have any freedom. I hate to break it to you kids but you have you will have when you’re 43. Mortgages, jobs, and kids will keep you on your toes more than any parent’s curfew. And I venture to say from my conversations with Kristen Graves Ragsdale, Elizabeth Hudson Scruggs and Kirsten McDonald Harris and the many others who shared their 1988 class reunion photos with me, their days were spent much like mine. Although these fine ladies were probably at Rivergate or Hickory Hollow rather than Cherry Valley.

Through the years, these same classmates have become as familiar as family. We were in each other’s weddings, have seen each other’s children grow into teenagers, been around to congratulate each other through promotions and business ventures. In the same manner, we’ve been there to support each other when we’ve sustained hard times and sadly, also been there when it came time to bury a loved one.

And while we may not see each other on a daily basis, no matter the school we graduated from, there is something comforting about seeing a former classmate in the aisle at Target or the DMV or even better, on the local ballfield late at night. Words are not always needed, a simple nod takes us back to a good place.

These days, however, because of work commitments and all the duties that come with being a grown up, my running buddies can’t meet at Sonic late at night, just to hang out. Instead, I’ll be watching the UT – Florida game at home and I’ll text Greg about that terrible call. Or I might see James Vaden at Demo’s and immediately send a text to Terry Tarpley, recalling the time we three went to the lake without a care in the world.

So, 25 years later, we may be a little thicker, a little grayer, a little slower but in the blink of an eye, we are on my back porch laughing, cutting up, living our

Jack Thompson & Greg Allison Winners of the most changed and least changed awards lives, and that’s exactly where I had hoped to be.