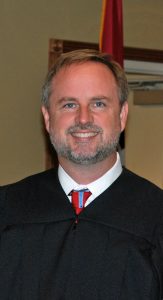 In 2020, the Judges who cover the 15th Judicial District comprised of Wilson, Smith, Macon, Trousdale and Jackson counties will undergo a bit of a makeover.

The path to this election is different than most as Circuit Court Division II Judge, John Wootten, retired effective January 1, 2020, five and a half years into his eight-year term.

His retirement opens a vacancy for one of the four trial court judge positions which cover the five-county area. Chancellor C.K. Smith, Circuit Court Division 1 Judge, Clara Byrd, and the Criminal Court position I hold will not stand for re-election until 2022.

Then there are the State Judges.

The citizens of Wilson, Macon, Smith, Trousdale, and Jackson all elect the State Judges.

In early November 2019, Judge Wootten announced his retirement as Circuit Court Judge. After 21 years of impeccable service as our Judge, he will be missed. Upon taking the bench after my election in 2014, Judge Wootten was a great resource for me when faced with an unexpected issue or the need for a second opinion. Judge Wootten personified what a good judge should be whether on or off the bench. I consider him a true friend and will sorely miss his presence in our court system. But after serving his country as an Air Force Veteran, working as an Assistant District Attorney for fourteen years and then our Judge for over two decades, he certainly earned the right to take some time off!

When one door closes, another one opens. Prepared to walk through that door are four candidates vying for the open seat in the next general election in August 2020. All are in the midst of beginning their respective campaigns to finish the remaining two (2) years of Judge Wootten’s term and then stand for re-election with Chancellor Smith, Judge Byrd and myself in 2022, for a full eight (8) year term.
I’m privileged to have worked with all of the candidates and know their families, though each in a different way.
Wilson county attorney, Shawn McBrien, was my law partner for ten (10) years before I was elected. Nothing allows you to know someone like practicing law with them. The fast pace and multitude of both legal decisions and issues dealing with personnel, budgeting, and the business side of a law practice have a way of revealing your true personality and your strengths and weaknesses. Shawn and I never had a cross word in all the years of our practice and I was able to observe first hand his innate ability to spot a legal issue and his love for researching the law in hopes of prevailing for his client. His easy demeanor and attention to detail will serve him well should he be elected.

Assistant District Attorney Javin Cripps was an opponent of mine during my years as a practicing criminal defense attorney. Since my election, the Smith county native has been responsible for handling Macon county’s General Sessions and Criminal court dockets for District Attorney General Tommy Thompson’s office. This responsibility has resulted in my observing first hand his abilities as he has prosecuted hundreds of criminal cases including several First Degree Murders. Macon County is the 2nd most populous county in the District and carries with it an extensive and varied caseload. I have found Javin to be a skillful litigator, decision-maker and docket manager. Skills that bode well for being a good judge.

Smith County General Sessions Judge Michael Collins was elected by the citizens of Smith County the same year as I. Though we had several civil cases against each other over the years when we were both in private practice, it was during the long months of that 2014 campaign that Michael and I developed a strong friendship. Similar to the bonds achieved from practicing law together, campaigning is highly stressful and lends itself to revealing one’s positive and negative traits. I got to know his wife who worked tirelessly with mine during the election season and our children campaigned for their Dads side by side at many a parade or political rally. Since becoming Sessions Judge, Michael has worked hard for the citizens of Smith County and dedicated himself to his position. He and I would work well together just as we did during the hot, hot summer of 2014.

Smith county attorney Branden Bellar is the final candidate. I’ve known Branden the longest of the four as he and I were in the same law school class together during our days at the University of Memphis School. Before that, however, we battled each other on the high school football fields – he for Gordonsville and I for Watertown. Branden maintains a diverse civil and criminal practice with an emphasis on government issues and represents several governmental entities throughout the district. Some folks may not know that Branden comes from a law background with his father Jacky O. Bellar maintaining a distinguished law practice in Smith county for decades. Branden possesses a tremendous work ethic and would be a real asset to the collection of judges should he prevail.

Now – it gets a little more confusing.

Shawn McBrien, Javin Cripps, and Michael Collins will square off in the Republican Primary on March 3, 2020. Early voting begins February 12, 2020. But only, Smith, Macon and Wilson County are holding Republican Primaries. Trousdale County and Jackson County chose to not hold primaries for the judicial race.

The Democratic Party chose to not have primaries in any of the five (5) counties for the judicial race.

The winner of the Wilson, Smith and Macon County Republican Primaries will then face Branden Bellar, running as an Independent in the General Election in August 2020.

Then in 2022, all the State and General Sessions Judges will run again for their respective eight (8) year terms.

Personally, I can’t express what a privilege it has been to serve all of you the last five and a half years. I know how hard it is to run for office and I respect all of these individuals immensely for not only wanting to run but wanting to serve. The Courts we serve do not belong to us – they are the people’s Courts and I’ll be honored to work with any one of these fine folks in the coming years.