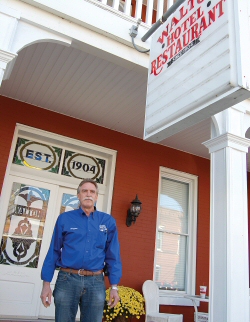 STORY and PHOTOS By KEN BECK

Less than 30 miles from Lebanon up Highway 70 to Carthage, day trippers will discover home cooking and Southern hospitality in a hotel restaurant that 100 years ago fulfilled the appetites of hungry riverboat passengers and traveling salesmen who rode the rails.

The brick Walton Hotel & Restaurant was reborn last August after a 15-year nap due to the perseverance of realtorbusinessman Digger Poindexter, who confesses to an addiction. “I just like old buildings,” says Poindexter, 57, who has lived in Carthage all his life. “My office is probably 100 years old. The house I live in is 100 years old.”

According to “Smith County History,” the original Walton Hotel, constructed by Capt. William Walton, was razed by fire in 1885. In the early 1900s, Monroe and Sally Fisher built the current Walton Hotel one block north of the original on Main Street. At the grand opening in 1904, finely dressed ladies and gents in scissor-tailed tuxedoes supped on fine food and enjoyed music provided by a jug band from Nashville.

The Fishers sold their hotel to the Read family, in whose hands it remained until 1975, when they sold it to Fritz and Bettie Sircy. “It was in operation when I bought it from Bettie Sircy in 1995. Fritz had died, and she put it up for sale. I bought the building, and I held the auction to sell the contents for her,” recalled Poindexter, who has owned and operated Poindexter Realty & Auction for 19 years. “At the time there were three tenants, and the building was leaking somewhat and very, very rough. Upstairs there were 17 rooms and two bathrooms with claw foot tubs. My intention was to get it open and back up.”

Poindexter had no idea that his dream project, a 10,000-square-foot structure with 11-foot-high ceilings, would take 15 years to complete – with a few nightmares between then and now. When the fire marshal and building inspector came to take a look-see, they found fire hazards, including a soot-covered kitchen and other structural inadequacies, thus the old hotel did not pass muster and could not be reopened.

“I knew I had to get it repaired. We put a new roof on it and started doing structural work and repaired the hardwood floors and making it safe,” said Poindexter, who found all the walls to be three bricks thick, while the timber used inside was oak and beech.

“We started gutting it in the mid-to-late ’90s. We tore all the inside wall covers out and left the supporting walls and lowered the archways. We put stud walls against the brick to run wiring and insulation. We sheetrocked everything upstairs and downstairs and took every fifth bedroom out and made a full bathroom.”

While Poindexter’s project may have seemed like a folly to some, he was a man with a plan. Unfortunately, he based a portion of his scheme on politics. “What I was going towards, when Al Gore ran for president in 2000, I thought, ‘If he becomes president then that should bring tourists to this town.’ But when he lost, that kinda blowed my tourism idea. I quit working on it for awhile.”

So for more than 10 years a sign hanging over the sidewalk out front read: Closed for remodeling. “Some of the townspeople said I never would open it up,” said Poindexter. “A couple of years ago, I stated working on it and finishing stuff to it.”

Today the Walton Hotel & Restaurant is again open for business for overnight guests and daily diners. The original front doors remain in place, however they sparkle with colorful leaded glass windows made by Cheryl Rowe of Pleasant Shade. There are 10 bedrooms upstairs, and three are double rooms. A handicapped accessible bedroom is downstairs. Each room features a flat-screen TV and cable, and most of the rooms are decorated with antique furniture. A cut-glass chandelier that Poindexter purchased at Cuz’s Antiques in Lebanon dangles above the staircase. And the hotel has an upstairs meeting room, which is already getting bookings for family gettogethers.

“I don’t know the difference between a bed-and-breakfast and a hotel and a restaurant, except at a bed-and-breakfast you get your breakfast free,” said Poindexter, who before working in real estate, helped build wings for the B-1 bomber and C-130 at AVCO in Nashville, labored at Precision Rubber in Lebanon, and worked at Cumberland Supply Company in South Carthage for several years.

“We serve two meals a day, four days a week, and three meals a day on Fridays and Saturdays, and a Sunday dinner,” he said of the restaurant, which employs 17 people. “We have a meat-and three, usually with two types of meat and five vegetables to choose from, and cobblers. We take grill orders. Fried chicken is the big thing on Sunday”.

People tell me stories about growing up here and going downtown after church on Sunday and having fried chicken at the old hotel. “A world of people tell me how proud they are that we give ’em a good place to eat,” said Poindexter, pointing out that there were jewelry stores on both sides of the hotel when he bought it. It now appears that he’s the one who has a true gem from the past on his hands.

How Digger got his nickname “My father was a bulldozer operator. Back in those days a lot of dozer work meant digging ponds on farms. When a farmer had a pond dug, the neighbors would come and watch. My father was pretty proficient in digging, and lots of people called him Pond Digger. My first name is Charles, which I didn’t care for much back in school; so I started going by Digger.”