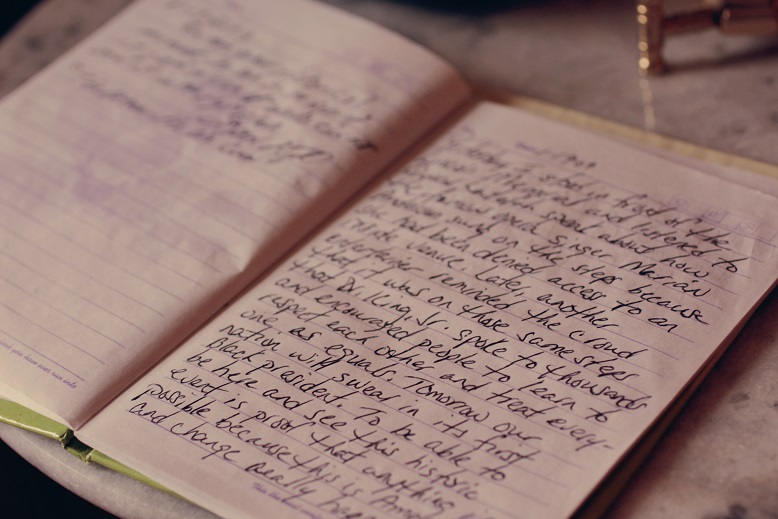 As they witnessed the Jan. 20, 2009, inauguration ceremony of President Barack Obama, Doreen Stewart and her three siblings had no clue about their kinship to the new First Family.

Five years later, in October of 2014, Doreen, her sister Anne Waggoner and their father Tom Stewart attended a funeral in Kingston, Ga.

“After the funeral of an uncle, our Aunt Jeannie Lovingood told us that we ought to take a look at the memorial in the same graveyard,” recalled Doreen, who lives in the Smith County community of Lancaster.

Engraved on a tall black granite tombstone they read the following words about the great-great-great grandmother they never knew.

THIS MEMORIAL MARKS THE GRAVE OF
MELVINIA “MATTIE” SHIELDS McGRUDER

SHE WAS BORN A SLAVE IN
SOUTH CAROLINA IN 1844.

AT AGE 8 SHE WAS BROUGHT TO
THE SHIELDS FARM NEAR
WHAT IS NOW
REX, CLAYTON COUNTY, GEORGIA.

IN THE LATE 19TH CENTURY
SHE MOVED TO KINGSTON
TO BE NEAR HER PEOPLE.

FIRST LADY OF THE
UNITED STATES OF AMERICA

MELVINIA’S STORY IS ONE OF HOPE

Doreen and her sister were astonished to find they shared the same great-great-great grandmother as the First Lady of the United States.

“When I read she was born a slave, that was a moment so defined for me. She had no idea her great-great-great granddaughter was going to be First Lady of the nation,” said Doreen. “Knowing my ancestors’ stories allows me to see how far God has brought my family. For me, God had a hand in it, from a slave to the White House.”

“We just found out about a year ago that they were related. We’re just stragglers. We didn’t have a clue,” smiled Doreen.

Sister Debra Smith laughs, “We went to both of President Obama’s inaugurations, and we didn’t know it. We could have gotten closer.”

“My immediate reaction,” said Anne of the news about their ancestor, “is that I was impressed with her life history. It had no association with the new president. She had a legacy she never knew. I don’t know how she would have reacted. I like to think she would not have taken on airs. This was a personal connection for me to a woman who had been a slave and survived to live a long life.”

Born into a family of 10 children, Jennie Elliott moved to Smith County when she was 9 years old. She met Tom Stewart, her husband to be, when they were students at Turner Junior High School in Carthage.

The two married in 1952 as Tom pursued a 23-year career in the U.S. Air Force and served in the Korean War and Vietnam War. Their first three children were born in Austin, Texas, while Doreen took her first breath in Columbus, Ohio.

Anne, a retired Los Angeles school district administrative assistant, and sister Debra, share a home in Stewart Hollow. Debra was the first black cafeteria manager in the Smith County school systems and then became the first female black letter carrier in the county and had a 19-year career with the U.S. Postal Service in Hickman and Lebanon.

Dennis lives in Nashville and works for the state of Tennessee, while Doreen, who has compiled four cookbooks and won blue ribbons for her fried pies, is a health assistant and lives in Lancaster.

Tom lives in Stewart Hollow near his two oldest daughters on the same piece of land his father Will Stewart bought in 1945 in Elmwood. After retiring from the Air Force, Tom worked for 10 years at Smith County Memorial Hospital as a materials manager and then became the first black letter carrier in the county, a job he held for 15 years.

The military veteran also knows his way around the kitchen, garden and grill. At last summer’s Smith County Fair he captured blue ribbons for his jams, jellies and canned green beans and earned best of show for his smoked meats and first place for his ham and bacon.

About 20 relatives from Georgia came to Carthage for his 85th birthday celebration in November, and the Stewart-King family plans another reunion in Smith County on Memorial Day weekend. 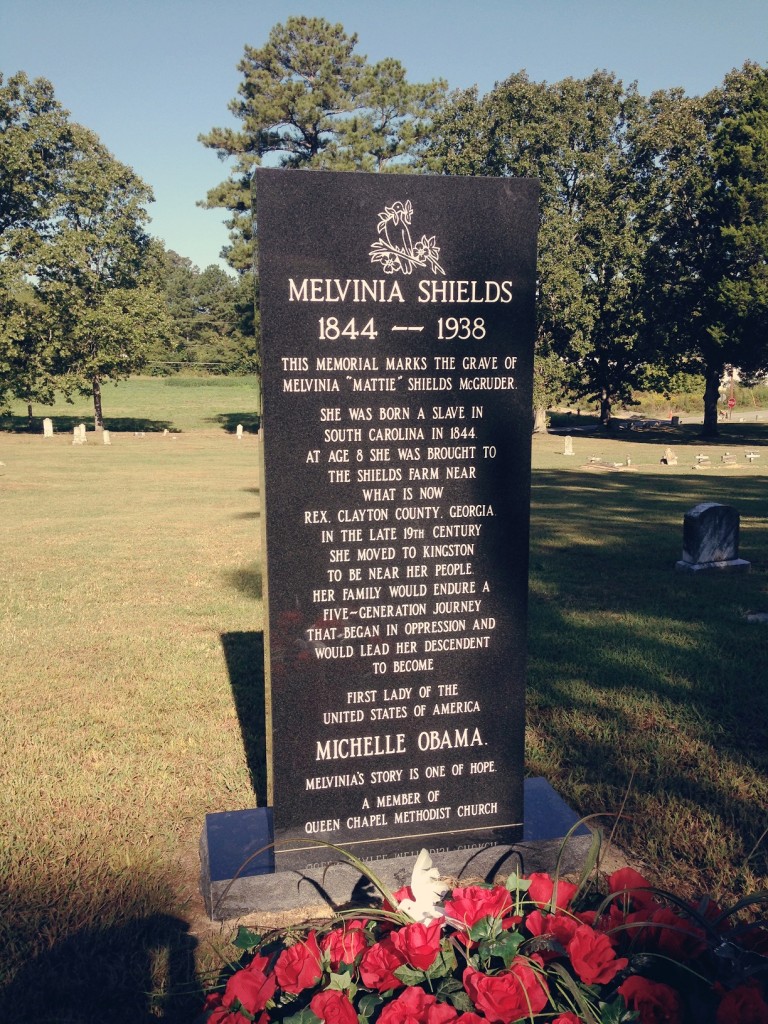 As for their famous ancestor, Melvinia Shields was born a slave in 1844 in South Carolina, and sent to work on a farm owned by Henry Shields in Rex, Ga., when she was 8. She gave birth at the age of 15 to her first child, Dolphus, in 1859 or 1860, with the father being Shields’ oldest son Charles.

The house slave labored as washwoman and maid. She bore four children, all of whom she gave the last name of Shields, and she lived on the Shields farm into the mid-1870s.

A second monument was dedicated to Melvinia in Rex, 21 miles southeast of Atlanta, on June 26, 2014, to honor the five-generation journey of First Lady Michelle Obama’s ancestry from slavery to the White House.

During the last 60 years of her life, Melvinia lived in Kingston (Bartow County), 55 miles northwest of Atlanta, where she changed her name to Mattie McGruder and worked as a midwife and seamstress and helped raise her grandchildren and other children in the community. She was once described as “a loving, spiritual woman seen often with her Bible and singing hymns.”

Bartow County historian and writer Sheri Henshaw is in the midst of composing Shoutin’ Down the Silences—A Folk-Life Play Based On and Around the Life of Melvinia Shields and the War-Torn Community of Kingston and Surrounding Northwest Georgia, circa 1844-1920. It will feature songs from the post-Civil War era that span Melvinia’s journey from slavery to freedom, using her story as the central theme.

Henshaw says, “Melvinia Shields was born a slave and became a free woman after the Civil War and lived much of her free life in Kingston, Ga. She left an amazing legacy—a family of accomplished, educated, and illustrious descendants, including her great-great-great granddaughter Michele Obama, First Lady of the United States. This incredible and complex woman has been silent for too long. Now she speaks.

“I hope to have the project completed for a work-shopped performance sometime in 2016, possibly as a part of the local Juneteenth celebrations in the area.”
That’s something Melvinia’s great-great-great grandchildren in Smith County, Tennessee, would have to see. Neither though they nor their late mother ever met the woman who connects them to the First Family, although they feel they are getting to know her better as more segments of her life are coming to light.

“She prevailed. She went on to raise her family, provide a living, a religious woman, often seen with her Bible. She was strong in her faith. It had to have brought her through. We had strong women in our family. Our mother, our grandmother, they may not have had a lot, but what they lacked they made up by loving their family.”

In mid-January 2009 Doreen Stewart, her sisters Anne and Debra, brother Dennis, nephews Perry and Thomas and a friend made the 630-mile road trip from Carthage, Tenn., to Washington, D.C., with one goal in mind: They wanted to witness the inauguration of Barack Obama, the first black man elected president of the United States.

Doreen recalls that on that cloudy day, moments before the new president took his oath of office, the sun broke through and shone upon the thousands of people gathered.

“It was so amazing,” she said of the historic event, “we were all one.”

“We were about 300 feet away from the president,” Anne said, “close enough that we could see him without monitors.”

Doreen kept a journal during the trip as she wanted to preserve her memories for a lifetime.

“People near us were telling their stories,” she said, thus she put her journal into the hands of family members and strangers and invited them to record their thoughts.

“I stood in front of the Lincoln Memorial and listened to Queen Latifah speak about how the famous opera singer Marian Anderson sung on these steps because she had been denied access to an inside venue. Later, another entertainer reminded the crowd that Dr. King, Jr. spoke to thousands from these steps and encouraged people to learn to respect each other and treat everyone as equals. Tomorrow our nation will swear in our first black president. To be able to be here and see this historical event is proof that anything is possible because this is America and change really happens.” —Doreen’s sister Anne Waggoner

“A very great historical moment. To be here, to see it, to hear it, and to live it. Words can’t put it in the right place. “The Dream—Yes We Can!” —Doreen’s brother Dennis Stewart

“Although very surprising, this day is a day very memorable moment in history, not only just for African Americans or myself alone but for all people everywhere.” — Jason Scott, a black man who worked at the American Historical Museum in Washington, D.C.

“What a monumental moment. It’s so incredible to see how far our country has come, and Obama truly gives us more hope for the future. Seeing all these people come together is unbelievable. Blacks, Whites, Asians, etcetera. No more — WE ARE ONE” — Katherine Freniere and Chad Samijan, who flew from Orlando, Fla., to Dallas, Texas, to Boston, Mass., to Washington, D.C.